We are not really sure what George Vella is on about but we are pretty sure he is targeting someone with this latest public post labeling a family as ‘Toxic‘ and naming the family members on his public wall.

Vella threatens (as usual) that ‘all will be revealed‘ (well, ‘revelled‘ as he says), George Vella then goes on to make offensive accusations of ‘robbing the dead‘. 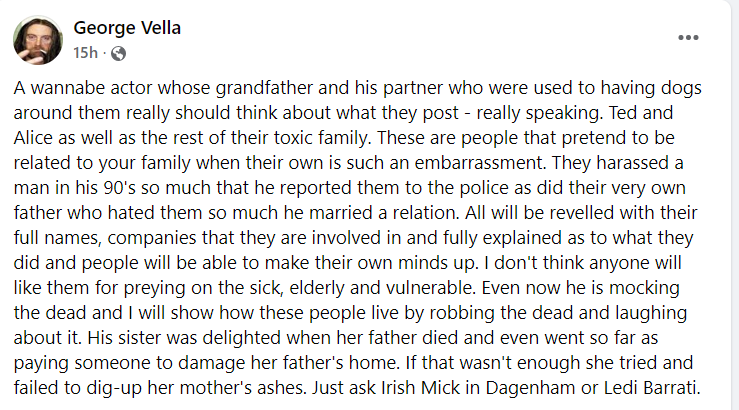 “A wannabe actor whose grandfather and his partner who were used to having dogs around them really should think about what they post – really speaking. Ted and Alice as well as the rest of their toxic family. These are people that pretend to be related to your family when their own is such an embarrassment. They harassed a man in his 90’s so much that he reported them to the police as did their very own father who hated them so much he married a relation. All will be revelled with their full names, companies that they are involved in and fully explained as to what they did and people will be able to make their own minds up. I don’t think anyone will like them for preying on the sick, elderly and vulnerable. Even now he is mocking the dead and I will show how these people live by robbing the dead and laughing about it. His sister was delighted when her father died and even went so far as paying someone to damage her father’s home. If that wasn’t enough she tried and failed to dig-up her mother’s ashes. Just ask Irish Mick in Dagenham or Ledi Barrati.”

Neil Wilkes, (who may be George Vella’s love child due to the similarities to the early photos of Vella), is quick to respond to Vella’s rant with

George Vella and Neil Wilkes are a laughing stock for their pathetic pantomime performances, they often play out their silly little games online like this, having an open discussions between themselves like children on a playground.  If they weren’t so creepy, it would be funny.

Vella apparently has 28 criminal convictions (up until 2013) and apparently stalks his own family.

Both Wilkes and Vella were involved in handling child abuse videos.

We have been told that George Vella didn’t even bother to attend his own fathers funeral, and his mother (Maureen) disowned him.

Other information is coming to light relating to  ‘Paul Davis‘,  ‘Mark Houghston‘, “Susan Mitzi” and his step brother, Kevin.