I am sick to death of George Vella posting about me. This is the only reason I publish comments about the posts he has made about me!

George Vella’s latest malicious and false claim is that that he has not reported me to the police and has not given statement to try to have me convicted..!

Here are two such statements made by George Vella for the sole intention to try to get me locked up.  I am publishing this heavily redacted.  I had no intention of publishing these until George Vella posted this lie about me in his hate filled group in which I am the only subject in the announcements section!

In the latest malicious post he made about me that included my photograph, George Vella says

“Just for the record. I was asked to give a statement by officers that were prepared to travel all the way from Lancashire to Bedfordshire. This I refused.“

Note his mention of Operation Malaya! 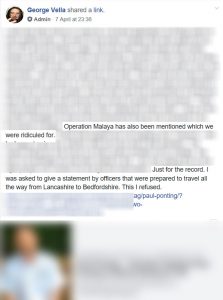 Well, FOR THE RECORD and to show what a fucking liar he is.

Here are TWO statements (one 2 page and one 3 page) George Vella has made against me, working with Lancashire police to try to get me arrested.  This was within the time frame of Operation Malaya!

For the record, after George Vella made these false and malicious allegations, Lancashire police took no time to RAID MY HOUSE AND REMOVE MY COMPUTERS.  All they were after was an excuse to destroy my evidence I had on the police (of course, I had this safely backed up)  No charges were brought.

I will gladly remove these when a formal apology is posted and the malicious comments about me are removed from the anti police facebook group. 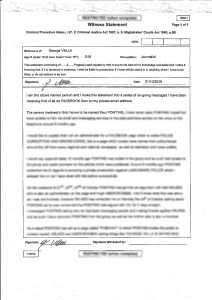 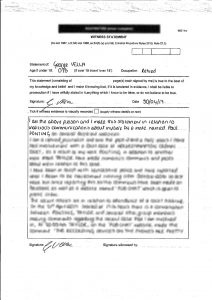 […] he never gave police a statement to try to get me convicted.  Oh, really, well, what are these two statements hand written and signed by George […]

[…] the country have been ‘enlisted’ by Lancashire police into Operation Malaya, they are George Vella of Bedfordshire, Neil Wilkes of the West Midlands and Darren Hogan also of West […]